The Big Eddy Crag is dry-tooling area to the right of the Big Eddy Walls. The best thing about this crag is you can be tying into your rope at the base of the routes in as little as 10 minutes after leaving town, so it’s ideal for a quick workout. The routes are also suitable for rock climbing in summer, although the rock is exfoliating and gets dusty quickly similar to the Big Eddy Walls to the left.

The rock is reasonably solid, but caution should be used when positioning the belayer in case of falling rocks and ice. YDS grades are to be used if you climb the routes in the summer with bare hands. M grades are to be used if you climb with crampons and a combination of ice tools and hands. The rock has not been modified by drilling or chipping holds like some other dry tooling crags, so the routes can feel a little “scratchy” as you would expect to find in the mountains. Please contact me if you have any feedback on grades or otherwise.

Please do not dry tool at other rock climbing areas in Revelstoke not specifically created for dry tooling, as crampons and axes damage the rock.

Skxikn (Big Eddy) used to be where the Sinixt (Sn̓ʕay̓čkstx tm̓xʷúlaʔxʷ) people set up a settlement in the summer months for hunting, gathering, and trading with other Indigenous people coming from the West.

1.4km North along the Westside Road from the Trans Canada Highway turnoff (across the road from the Big Eddy Boulders, to the right of the Big Eddy Walls), less than 5 minutes driving from town.

For routes 4-6, approach on an overgrown trail close to the routes, 1 minute from the car. For routes 1-3 use the approach for the Big Eddy Walls rock climbing routes which traverses in from the climbers left. 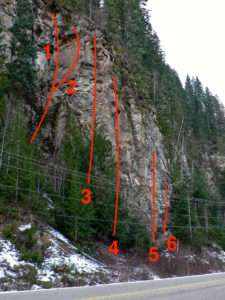 Use the belay bolt at the large fir tree 10m back from the base of the route (away from rock and icefall hazard). The start is easy (Low 5th class), but loose and best to run it out up to the first bolt. Follow the left line of bolts up the south facing wall past the obvious finger crack to the anchor.

Clip the first bolt of Booya Kasha, then follow the right line of bolts.

Belay from a bolt at the top of the large fallen tree (can be backed up with a #0.75 to #2 cams if desired). Trend right into the right facing corner and a bolt. Climb straight up over easy terrain until you see more bolts above. Follow the bolts to the top, mostly climbing on their right. Note: there is a traverse to the right before the last roof with the potential for a nasty pendulum fall.

Follow the bolts up and then trending right into the large corner above. From here the crack protects well straight up to the anchor. Please leave the fixed nut in place on the lower half of the route, as it’s very difficult to place on lead.

Follow bolts up the face 5m left of Westside Is Da Best. Please be aware of the power-lines if you throw your rope to rappel, threading the rings and getting lowered will eliminate any problems.

Start under the right hand side of the overhang and follow bolts up the right facing corner. Short but pumpy.